Inhaltsverzeichnis einblenden
Inhaltsverzeichnis ausblenden
The potential of alternative heat sources is highest at low system temperatures, but current district heating networks are usually high-temperature systems. The aim of the IEA DHC Annex TS2 is to support the transformation of district heating networks towards lower temperatures (the so-called 4th generation). For this purpose, Annex TS2 forms an international platform that enables an exchange on the topics of technology, system, demonstration and competitiveness.

Changing market conditions and the need to avoid CO2 emissions make it necessary to rethink the current generation structures in heat supply. Since renewable fuels are increasingly used for the industrial and mobility sectors, alternative sources such as solar and geothermal energy, ambient heat and waste heat as well as heat pumps will play an increasingly important role in the heat supply sector. However, their potential and economic efficiency is highest at low system temperatures, but current district heating networks are dominated by high temperatures.

Accordingly, besides the installation of new low-temperature systems (so-called 4th generation district heating networks (4GDH)), the reduction of system temperatures in existing systems is of crucial importance for sustainable decarbonisation.

The objective of the IEA DHC Annex TS2 is to facilitate the implementation or transformation of district heating networks towards the 4th generation. For this purpose, the Annex TS2 forms a platform that creates the prerequisites for implementation with international experts. In this context, the following 5 topics were addressed:

Within Annex TS2, an Austrian consortium consisting of AIT, AEE Intec, TU Wien and Austroflex participated and contributed mainly in the area of system analysis (task lead: AIT) and through various case studies.

In new buildings, low-temperature district heating is easier to realise than assumed by many actors, but suitable processes have to be implemented and a certain foresight is needed. In existing networks, however, the prevailing high flow temperatures represent a lock-in effect: For fossil fuels (and biomass), the economic advantages of low system temperatures are low, resulting in little motivation to reduce the temperature level. Accordingly, there is a lack of concrete incentives to initiate measures to reduce return temperatures, which in turn results in a reduced potential of alternative heat sources and stabilises the dominance of high-temperature generators. 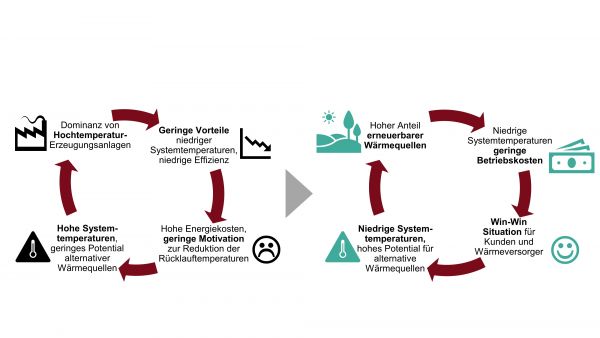 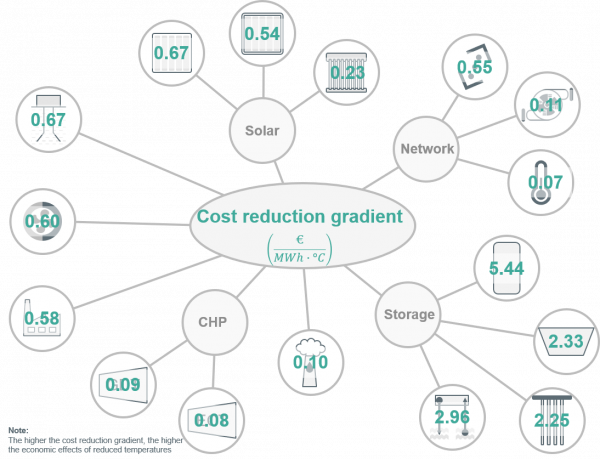