Inhaltsverzeichnis einblenden
Inhaltsverzeichnis ausblenden
The present research proposal focused on the possibility, implications and consequences of "inwards urban expansion" through densification of the existing urban tissue. In this context, densification is not only approached through known and common aspects of building regulations and guidelines, but in view of what is actually possible to achieve.

The present research project focuses on the potentials, implications, and consequences of the "inwards urban expansion" through densification of the existing urban tissues. In this context, densification is investigated not only through known and common aspects of building regulations and guidelines, but also based on what is reasonably feasible. Towards this end, methods and computer-supported procedures for the evaluation of relevant architectural and urban planning aspects of an existing neighborhood will be investigated. Densification developments will not only be examined in view of the legal and possible scenarios, but also evaluated against desired administrative and political goals. Consequently, urban densification potential can be seen and treated as an instrument for a coherent future urban expansion politic, offering a resource-efficient and energy-saving alternative/complement option for urban expansion plans.

The city of the 21st century as an expression of numerous cohabiting human beings is faced with many challenges, including:

In this context, one of the complex issues in need of addressing is the question of the future expansion of cities. Due to common inconsistencies among legal and administrative guidelines, the manner in which a city expands (commonly through designated urban extension areas), is not considered optimal.

The exploratory study EPIKUR focuses on urban densification. The objective is to generate a computerized method for geometrical and numerical presentation of spatial densification measures on different urban typologies, based on existing urban districts and in regard to distinct planning assumptions. With this method effects of various spatial interventions on the energy performance of a district are determined and contribute to the planning and decision-making process in city and infrastructure planning.

In the exploratory project EPIKUR, the potential of urban densification has been investigated, firstly independent of existing legal and normative requirements.

In EPIKUR project, we aimed toward the development of a computational environment for the generation and evaluation of alternative urban densification scenarios. The respective developmental work required the collaboration of experts in urban planning, building informatics, and performance simulation. The envisioned densification scenarios considered measures such as new buildings on yet empty building lots as well as horizontal and vertical extension of existing buildings. The respective potential future developments are framed here in part by a set of spatial constraints such as horizontal and vertical limits of spatial growth (e.g., property boundaries, building footprints, maximum permitted building height, building density, daylight access). This specific class of constraints are informed by corresponding local urban development concepts, as well as land use and building regulations as per well-established national (Austrian) and local (i.e., relating to the city of Graz) standards and legislations.

In the current implementation, we adopted an approach that couples rule-based reasoning and generative algorithms. Toward this end, we utilised digital information provided by the city of Graz, including 2D and 3D multi-layered CAD representations of geometry, cadastral lots, and street network. The initial district model was generated in the CAD-based modelling environment Rhinoceros 3D and further enhanced with the aid of parametric modelling and visual programming plug-in Grasshopper. Once the initial district model is generated, custom GH C# add-ons are developed for the inclusion and coherent application of spatial constraints within the buildable areas. The developed routines for constraint-based spatial operations were arranged and executed in terms of different sequences, exploring thus the theoretical maximum buildable potential by vertical and horizontal extensions. The generated alternative urban densification solutions are subsequently subjected to comparative assessment and ranked with regard to multiple evaluative indicators pertaining to net built volume gain, energy and environmental performance, cost factors.

In EPIKUR project we introduced a computational environment, which is intended to support the generation, visualisation, and evaluation of alternative urban densification schemes. The implementation process demonstrated the capability of proposed tool to generate potential densification schemes, such as horizontal and vertical extension of the already existing buildings, while accommodating the consideration of spatial constraints defined, for instance, in building regulations and guidelines. The outcome of such parametric analyses of urban densification scenarios is expected to provide valuable feedback to the decision makers toward more sustainable urban environment design and practices.

Further activities will include the adaptation of a specific approach that incorporates full dynamic numeric simulation capability in the urban energy computing environment. The resulting urban energy computing environment can facilitate the generation of dynamic and realistic energy use patterns via incorporation of stochastic occupancy models, as well as pertinent (locally-adjusted) representation of external boundary (microclimatic) conditions. This environment can thus enable users to assess the energy and environmental implications of large-scale design and renovation proposals to support, amongst other things, policy making at the urban level. 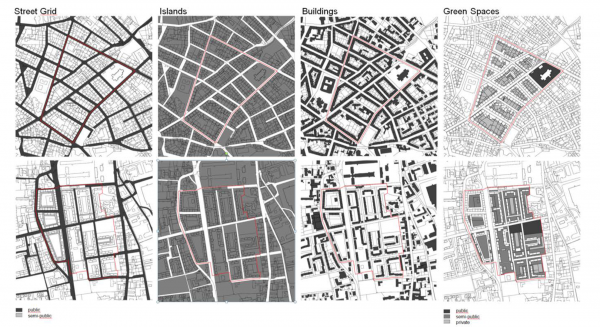 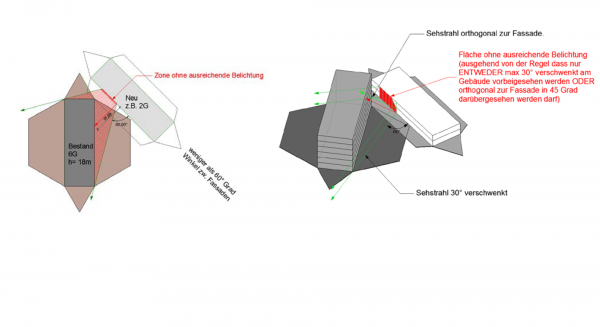 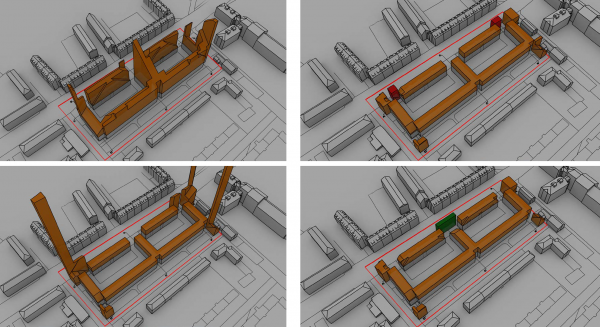 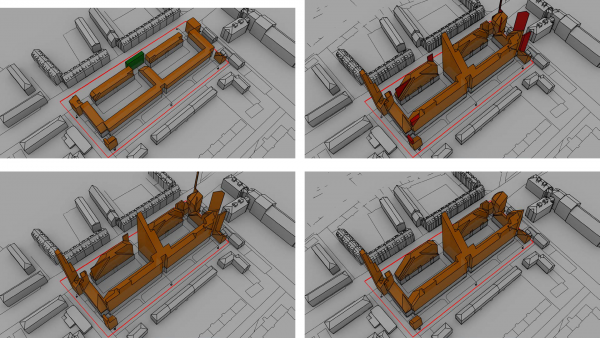 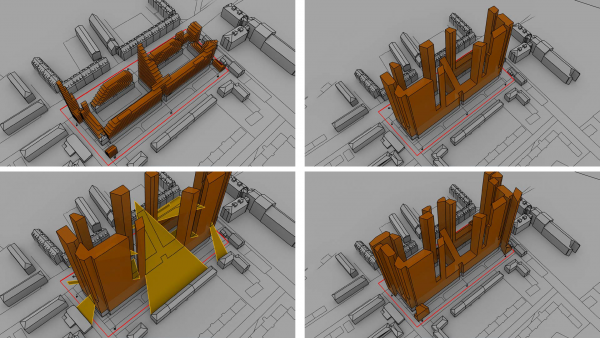