To the question of how contemporary urban development can address climate change, even newly developed urban districts and showcase projects provide only tentative answers. Seestadt Aspern – Smart Cities model region and urban development showcase project of Vienna – strives to break new ground and shows comparatively high standards with regard to investments for development of green spaces. Nevertheless, apart from the spacious Seepark, asphalt, stone and concrete dominate the image of public spaces that offer little refuge from heat in summer. The recently completed Seeparkquartier draws criticism due to the extensive use of dark asphalt for paved surfaces (Scherer 2020). Construction and maintenance costs, planning challenges, and complex coordination processes regarding liability issues and areas of responsibility of public agencies are just some of the inhibiting factors that make climate-effective greening of urban neighborhoods difficult. Greening projects initiated by civil society and designed in a participatory or co-creative manner could bring a breath of fresh air into urban development and open new perspectives, solutions and paths.

Many residents have moved to Seestadt Aspern hoping for a green neighborhood. The project "essbare Seestadt" was initiated by a concerned and committed resident who did not want to stand back and watch the large-scale soil sealing in the Seestadt, but wanted to draw attention to the development, look for allies and bring about changes for a green and edible Seestadt. She found support from actors of vienna.transitionBASE, an interim use project in which strategies of the post-growth economy were tested until October 2020 and which had already established a network of research partners. The resulting "essbare Seestadt" project sought to answer the questions of how citizen-led, bottom-up greening could work, what effects this would have on quality of life, biodiversity, climate effectiveness, and costs, what difficulties are encountered, how they can be overcome, and what preconditions and, in particular, negotiation processes are needed to enable a greener and edible city.

In order to address these questions, the first two expansion stages of the Seestadt were used as a real laboratory for co-creatively implemented edible greening pilot projects and an inter- and transdisciplinary consortium was formed, which included civil society organizations, residents, a planning office as well as institutes for social science, planning and ecological research. The first step of the research was socio-spatial exploration and analysis. The social and spatial potential on site was identified and compared with the general potential of (climate) resilience-promoting interventions, which was determined by best-practice analyses. Based on the results, building blocks and tools for edible neighbourhoods and regions were elaborated and a rough scheme was developed ('open concept'), which formed the agile planning basis and working thesis for the subsequent co-creative implementation process. Central to this process was the intensive involvement and engagement of local residents and all relevant stakeholders, whereby a comprehensive inventory of methods was developed and tested.

Citizen engagement in urban development is desirable, possible, enriching and has a high untapped potential. Positive impact can be demonstrated in the increase of social capital, quality of life, biodiversity, cost savings and climate impacts. During the co-creation process, 21 pilot projects were implemented in the Seestadt. Most of them were connected by the Liz Christy Trail – an experiential trail for edible cities and communities. The quintessence of the research results were worked into a community-oriented 'Guide for Green and Edible Projects and Open Spaces'. This guide is intended to serve as a basis and manual for actors to make their environment more livable and climate-friendly.

The "essbare Seestadt" project marks the first steps on a path that began with participatory green space design and is now leading to a co-creative future. Developments that are necessary to activate unused potential have become increasingly apparent in the course of the project. There is a need for:

These measures could lead to a culture of co-creation, characterized by trust and mutual appreciation of the groups of actors involved and an understanding of viable paths, and in which 'smart citizens' establish themselves as initiators and partners in the design of sustainable living environments. 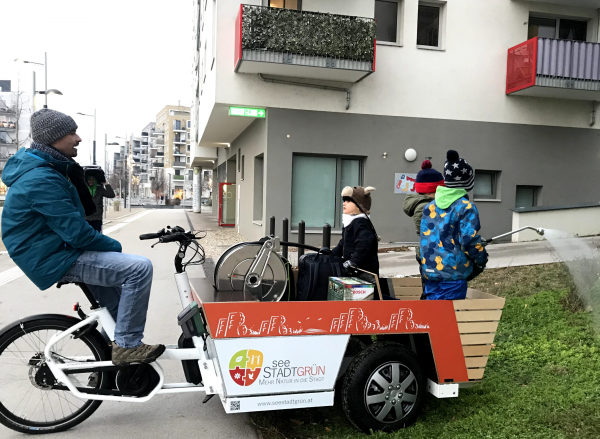 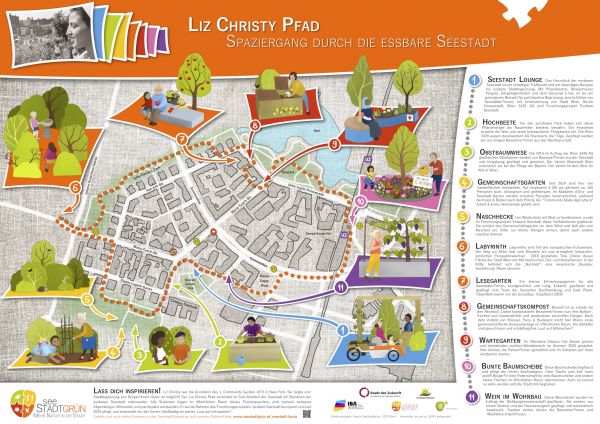 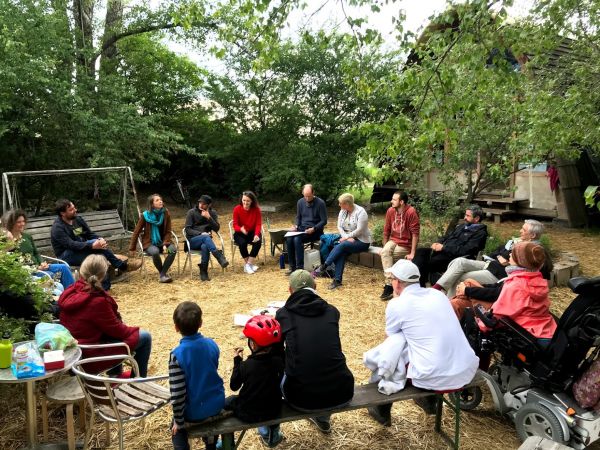